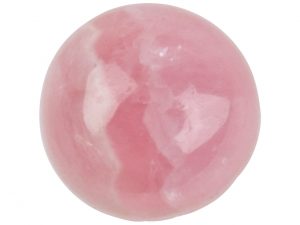 Looking for an unusually coloured gemstone to add to your latest designs? Well, if your jewellery making is complemented by soft pastel tones, you may want to learn more about the pink tones of the rhodochrosite gemstone.

What is the rhodochrosite gemstone?

Rhodocrosite is a manganese carbonate mineral that ranges from a subtle rose pink to a bright pink fuscia red, sometimes found with zig zags of white throughout the stone. Why is rhodochrosite pink? The pink colour comes from the manganese in the stone and subtly changes across each layer as the stone forms over time. Raw rhodochrosite is formed in fractures of sedimentary and metamorphic rocks, often produced as a byproduct in silver mines.

How is rhodochrosite formed?

In metamorphic rock formations, rhodochrosite fills out fractures in the rock where it repeatedly ascends and is captured over time. The repeated formation of the mineral allows it to build up in layers, each time producing a pink colour of a slightly different hue from the last. The raw rhodochrosite is then released from the fractures in the metamorphic rock cut into thick slabs, which can later be cut into cabochons for jewellery designs and other ornaments.

Raw rhodochrosite is also formed in sedimentary rocks. The minerals descend and form on the walls of the cavity, sometimes in stalactite form. This can occur on the floor and the roof of a cave, and these formations are removed and formed into slabs as above.

Where is rhodochrosite found?

How to identify rhodochrosite

Rhodochrosite is usually easy to identify with a little practice because it’s not very similar to a lot of other minerals. The gemstone’s colour, softness, and cleavage is rarely seen altogether in other stones. The only other mineral that raw rhodochrosite is sometimes confused with is rhodonite because both have a similar pink colour – and their names are similar too!

What’s the difference between rhodonite and rhodochrosite?

How to use rhodochrosite in your jewellery designs

Plan on introducing rhodochrosite gemstones to your jewellery designs? A good place to start is with pendants and earrings as they see less wear and tear. But if you do plan on adding some rhodochrosite cabochons to your ring designs, make sure you use a protective setting such as a bezel setting that will protect the stone if it’s worn on a regular basis.

How do you clean rhodochrosite?

Rhodochrosite gemstones are very soft so should be treated with care whenever it’s cleaned to avoid damage. In fact, it’s so soft that even wiping it may cause scratches. So how can you prevent this? Make sure that you use a soft cloth and some soapy water to avoid putting scratches into the stone itself. Remove any excess soap by rinsing properly. Don’t be tempted to use your ultrasonic cleaner with any rhodochrosite jewellery and when you store it away try to keep it separate from other jewellery and gemstones to avoid scratches.

Want to introduce this pleasant pink gemstone to your latest designs? Take a look at our current range of rhodochrosite gemstones part of our extensive range of natural and synthetic gemstones.

Dipping your toe into the world of casting? Otherwise known as “lost wax casting”, this technique has been used by decades of civilizations all over … END_OF_DOCUMENT_TOKEN_TO_BE_REPLACED

September 22nd marks the Autumn Equinox, signifying the beginning of Autumn. If, like me, you love the warm Autumn colours as the leaves start to … END_OF_DOCUMENT_TOKEN_TO_BE_REPLACED

Thinking of expanding your service offering? Or are you simply wondering “what is silver-plated jewellery?” and how it differs from sterling … END_OF_DOCUMENT_TOKEN_TO_BE_REPLACED

We are giving you the chance to win £100 for your

Have you seen the new gemstones shapes and sizes w

We are pleased to announce that the winner of Sept