Nothing captures the hearts of the general public like a Royal Wedding. Despite the wavering popularity of the monarchy in this country we always, as a nation seem to enjoy the pomp and ceremony that these state occasions demand. The Engagement Ring is always at the centre of the media focus throughout the proceedings so we thought it would be interesting to see how styles have changed over the decades. 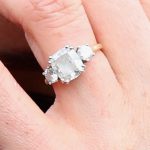 Given to the Duchess by HRH Prince Harry, this stunning piece designed and created by Cleave and Company, comprises of three trilogy diamond stones, with a simple 18ct yellow gold band. A simple yet equally as stunning engagement ring, there is no surprise as to why this particular design has become a favourite of many. 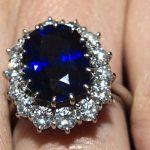 Today our modern day royal brides tend to opt for classic halo design engagement rings, often with an oval central semi-precious stone. Princess Diana’s (now belonging to the Duchess of Cambridge) sapphire/diamond engagement ring has been so well documented that few can forget the enormous 12 carat oval Ceylon sapphire which adorns the centre which was in some respects more fitting for a Hollywood film star.

Most royal engagement rings tend to be large but a little more understated than this. However you may be surprised to learn that this stone was in fact tiny compared to the Emerald famously given to Wallace Simpson by King Edward VIII in 1936. Presented just before the king abdicated, having reigned for only 11 months, the Emerald weighing a huge 19.22 carats was set in yellow gold and surrounded by diamonds and is one of the most lavish royal engagement rings to date. 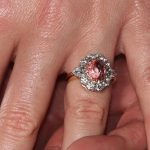 As you would expect, semi-precious stone choices are very traditional featuring, almost without exception, diamonds, rubies, sapphires or emeralds. A recent anomaly came in the form of a Padparadscha Sapphire which was chosen for Princess Eugenie of York this year by Jack Brooksbank, her husband to be. This rare pink/orange sapphire named after the Lotus Blossom, has unique colour changing properties and is one of the rarest gems on the planet particular when over 2 carats, which Princess Eugenie’s example most certainly is.

Duke and Duchess of Cornwall. 2005 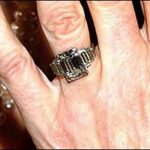 With its unique art deco design, this engagement ring belonging to the Duchess of Cornwall is a unique, standout piece. A uniquely designed diamond complete with a platinum band, this beautiful piece can be traced back to the late Queen Mother, another exquisite family heirloom. 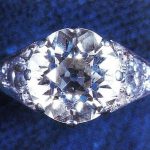 One of the most beautiful examples belongs to Queen Elizabeth II and contains a stunning old cut, round diamond estimated to weigh around 3 carats. Not ostentatious for a Queen by today’s standards but classically elegant and timeless. The engagement ring was designed by Prince Philip with the help of jeweller Philip Antrobus and was one of the few royal engagement rings to be made from platinum.

Interestingly the Queen wears her engagement ring alongside her yellow, welsh gold wedding ring, following royal tradition and clearly has no qualms about mixing metals. Most modern brides want their wedding and engagement rings made from the same metal but royal protocol comes first. 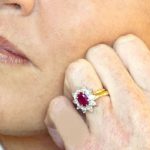 Presented to the Duschess of York on her engagement, this Burmese ruby is surrounded by diamonds in a traditional halo design and follows a familiar pattern by being set on an 18k yellow gold band. 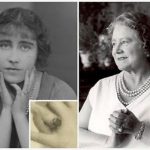 One other interesting variance from the norm belonged to the late Queen Mother, formerly Elizabeth Bowes-Lyon who gave up wearing her original sapphire/diamond engagement ring in her later years and instead opted for a huge pearl surrounded by diamonds. It is not clear why she did this, but it was a truly magnificent pearl ring which many speculated would be given it to Meghan Markle by Prince Harry…but that was not to be as we now know. 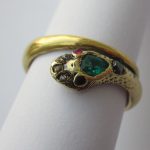 As you can see, Royal Engagement rings have varied enormously over the years with some of the oldest rings being the most unique. Take the engagement ring of Queen Victoria for example; it would be a strange choice today however a serpent at that time represented wisdom, loyalty and commitment which were very fitting for the occasion. The central stone was an Emerald which was Queen Victoria’s birthstone which was again quite common practice during Victorian times.

A fascinating jewellery journey through history I think you will agree, but which one is your favourite engagement ring?

Hi jewellery makers! I've put together a list of jewellery making books, that I feel would be ideal for those making their way into the world of … END_OF_DOCUMENT_TOKEN_TO_BE_REPLACED

I am old school…I admit it, some would go so far as to say I have Luddite tendencies; As despite huge advancements in technology and the way we both … END_OF_DOCUMENT_TOKEN_TO_BE_REPLACED

Whether you’re new to metal stamping or you’d just like to brush up on your knowledge, we can help. In our metal stamping guide, we’ll talk you … END_OF_DOCUMENT_TOKEN_TO_BE_REPLACED

Get a 🔥 Flaming HOT Deal 🔥 on selected hand

✨Congratulations to January's Design of the Mont

As it's #ValentinesDay, we want to share the love