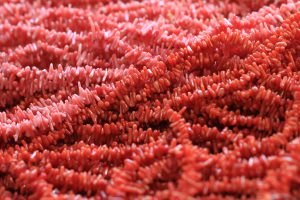 The warm peachy – pink tone of coral has been a central feature of this year’s colour palette, not only because it’s Pantone’s Colour of the Year for 2019, but simply because it is an ideal summer colour. It is light and bright; feminine, without being too girly and as someone who isn’t a big fan of pink, coral makes a great alternative.

But what of the material itself?

Corals are living, marine animals which come in a variety of different types, shapes, sizes and colours. There has been a great deal of focus on coral in recent times, in particular, on the great coral reefs which have been decimated by over harvesting, which has had a detrimental, knock on effect for all the marine life which inhabits it. Consequently laws have been put into place by The Convention on International Trade in Endangered Species (CITES) to attempt to protect it. However, many countries simply ignore this protective legislation and carry on regardless which can make buying ethically and sustainably sourced coral quite a tricky business.

There are three main categories of coral; reef building corals, semi-precious corals and precious corals each with their own individual characteristics and uses.

Reef building corals grow in shallow waters of sixty feet or less and provide valuable habitats for marine life of all descriptions. They are of no interest to the jewellery industry (which is a common misconception) but are however in great demand from the aquarium industry which has lead to widespread international concern.

Semi-precious and precious corals grow in much deeper water, usually between 500 – 1000 feet, and are of much greater interest to the jewellery trade. They come in the more desirable colours of red, pink, gold, blue and black and are harvested as skeletons once the coral has died. They grow incredibly slowly, sometimes only 1mm per year, so wiping out entire coral colonies simply for our own needs comes at quite a cost. 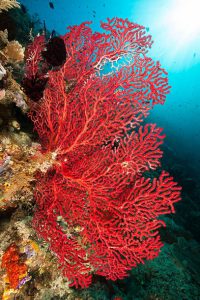 The differences between semi-precious and precious varieties comes down to lustre, porosity, hardness and colour as it does with most stones and gems and it comes as no surprise, that the red and pink varieties are by far the most sought after making them the most valuable by far. They tend to come from the Mediterranean and Japan and have been seriously exploited over the years.

As well as growing naturally, coral is also farmed commercially for the aquarium industry. Unfortunately at this time it is impossible to grow deep water semi-precious and precious corals in the same way as they are just too slow growing and require conditions that are extremely difficult to reproduce.

As you can appreciate, selling coral is fraught with problems. Cooksongold stock just a few items in the form of our beautiful Sea Bamboo beads which are made from Bamboo coral, which is the closet you can get to deep sea coral colour, without endangering the environment.  It is quite porous and is often filled to give it an improved colour and finish. However it is ideal for beads that don’t tend to endure too much wear and tear. 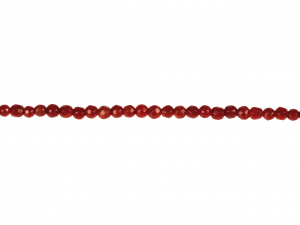 Natural coral is a beautiful material to work with but if you want to use it with a clear conscience, make sure you do your homework before purchasing.

If you’re interested in working coral into your next piece, see our collection

Joanna has worked in and around the jewellery industry for well over 20 years. She has designed and created her own pieces as a designer maker, as well as working in jewellery retail on a much larger scale, producing designs and NPD for some of the UK’s largest high street retailers

Otherwise known as dapping, doming is a technique used to create a dome shaped piece of metal for a pendant. In most cases, jeweller’s dome a circular … END_OF_DOCUMENT_TOKEN_TO_BE_REPLACED

Both Borax cones, or Borax bars, and dishes are brilliant soldering tools for building up your workshop, but what’s the best way to use them and how … END_OF_DOCUMENT_TOKEN_TO_BE_REPLACED

A reamer tool, or bead reamer, is a great tool to add to your collection. But if you’ve never heard of it, you may be wondering: “what … END_OF_DOCUMENT_TOKEN_TO_BE_REPLACED

Got some silver clay hanging around? Try making t

Which finding do you use the most?

Get inspired for your next creation by going to co

⭐ Introducing April's Designer of the Month ⭐

Over the last few weeks, we have announced a numbe