The story behind the GreenLion jeweller’s saw frame is both fascinating and unusual, and a true example of entrepreneurial spirit at its best. 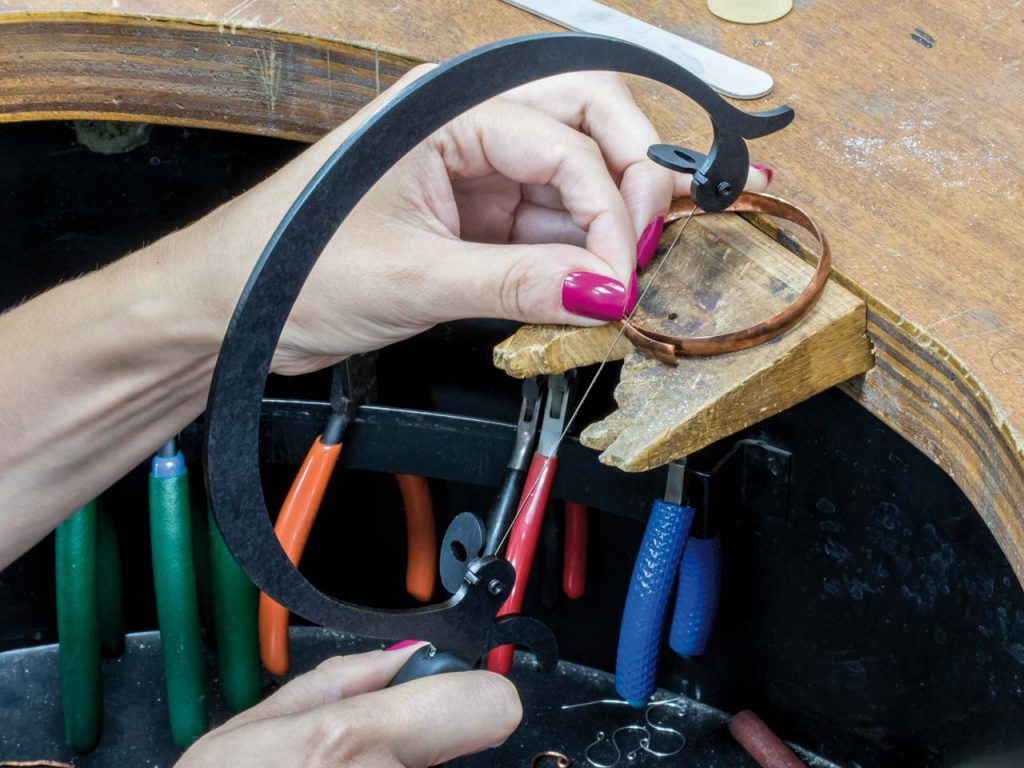 Its designer is a man called BJ Johnson, otherwise known as Soba One, who is the owner and featured artist of GreenLion Tattoo Studios based in Michigan, USA. Having trained as a metalsmith, GreenLion Tattoo Studio also encompasses a gallery and metal workshop where Johnson designs and builds tattoo machines as well as his wonderful saw frame.

Features of the GreenLion saw frame

His design for the unusual frame was born out of frustration with traditional, adjustable jeweller’s saw frames where he was finding the tension difficult to achieve and having various issues with the handle. In Johnson’s own words, “all good design is rooted in simplicity”, so he set about simplifying the saw frame into a one piece, 11 gauge, sturdy steel frame with an injection moulded handle for comfort and grip.

The second key feature of the GreenLion jeweller’s saw frame is the way in which the tension is achieved to hold the blade securely. Traditionally you compress the saw frame against the bench edge with your sternum, position and secure your saw blade with the screws and then release which allows the frame to spring back thus creating tension in the blade. 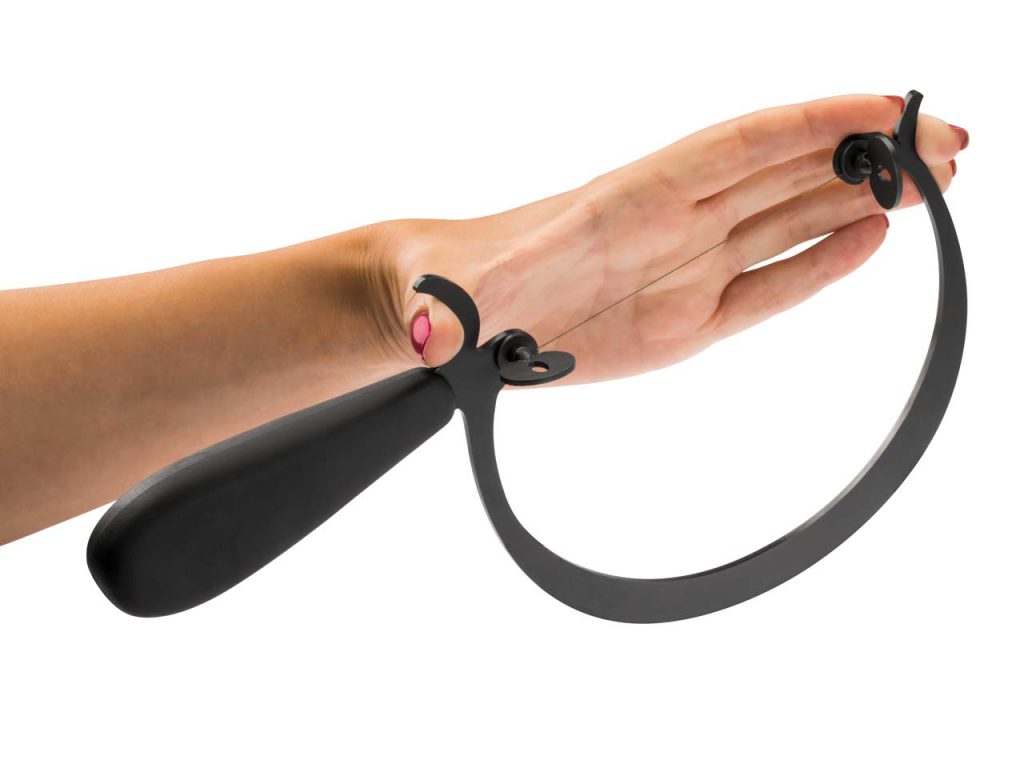 However, the Greenlion saw frame is much stronger than a traditional frame and requires far less compression to achieve the tension required for a blade. Johnson has added unique “not just for looks hooks” at either end, which allow you to compress the frame using just your finger and thumb – meaning you no longer have to push it against the bench, which requires far less effort.

The third and final feature is the reversible thumbscrews, making this frame ideal for both left and right-handed jewellers – but this is also quite handy if they are getting in the way when sawing using a jig or vice; simply reverse the thumbscrews and away you go!

So to recap, in the GreenLion jeweller’s saw frame you have:

On top of all this, the frame looks really good too as it has been designed by someone creative who cares about these things. Usually, jewellery tools are just functional, but this is aesthetically pleasing as well as being beautifully functional, a feature which is appealing to many. Those who try the frame seem to fall in love with it, so it seems to be rapidly developing a bit of a cult status amongst its users. Take a look at some of the many customers’ testimonies out there which show just how well loved this jewellery tool is:

“The GreenLion saw frame is by far the best I have used. Not only is it a beautiful tool and very lightweight, but the curved frame allows for fantastic balance, and the thick handle is very comfortable to hold.”

“Having seen the GreenLion saw frame in store for the first time I knew it was a tool I had to have, it is not only beautiful in design but it is easy to use with no unneeded extras. The handle is comfortable and weighted which I prefer to some of its lightweight competitors. This saw frame is built with quality and style making it the perfect new addition to every jeweller’s bench.”

“I do not regret my purchase as I am really pleased the results. The frame is really well balanced and is extremely easy to load with the correct tension. I love the fact that the depth of the frame is so much deeper than other standard jeweller frames. The fact that the frame is curved gives added flexibility. The handle is larger than its contemporaries and extremely comfortable and lessens hand fatigue during larger jobs. Worth every penny, looks good with professional results.” 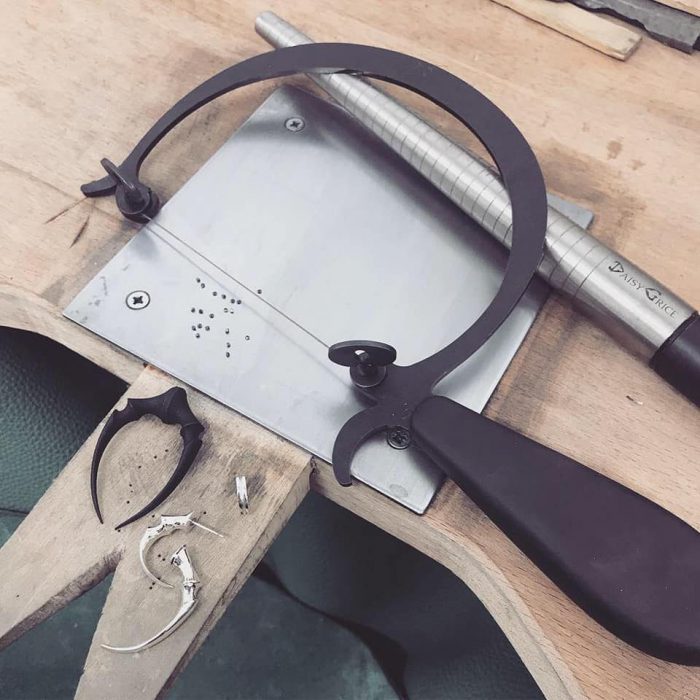 Where to buy a GreenLion saw frame

The Greenlion saw frame is only produced in small batches and is exclusively available through Cooksongold in the UK, so this is not something you are going to see everywhere. On the face of it, you might initially look at the price of the frame and reject it on that fact alone. However, once you discover how and why it was developed you can appreciate just why this saw frame costs a little more than a standard jeweller’s saw frame. This is not produced by a large manufacturer as part of a huge range; it is a carefully devised product, designed by a tattoo artist and metalsmith in America who wanted to solve a problem.

Want to add this saw frame to your own workbench? Order yours today from Cooksongold and see for yourself why it is such a popular tool among jewellery makers.

Hi jewellery makers! I've put together a list of jewellery making books, that I feel would be ideal for those making their way into the world of … END_OF_DOCUMENT_TOKEN_TO_BE_REPLACED

I am old school…I admit it, some would go so far as to say I have Luddite tendencies; As despite huge advancements in technology and the way we both … END_OF_DOCUMENT_TOKEN_TO_BE_REPLACED

Whether you’re new to metal stamping or you’d just like to brush up on your knowledge, we can help. In our metal stamping guide, we’ll talk you … END_OF_DOCUMENT_TOKEN_TO_BE_REPLACED

Can you guess the celebrity wearing this beautiful

These silver savings aren't to be missed Don't mi

Who watched the #BritAwards2020? What was your fa