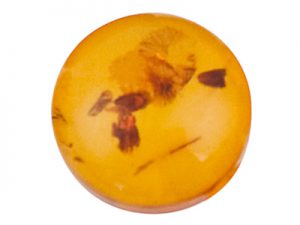 Discover our guide to the amber gemstone, where we discuss the properties and history of amber and answer questions like: “what is amber?” and “how is amber formed?”. Read on to find out more.

What is amber gemstone?

Natural amber is part of a group of materials that were once alive, known as the ‘organics’. This group also includes coral, pearl, shell, jet and ivory. Though none of these materials are technically stones, they are all naturally occurring and considered beautiful enough to be used for decorative purposes, such as natural amber jewellery pieces and carvings, or other small ornamental objects. If you were to consider amber gemstone’s properties, it would appear to be an unsuitable material to work with as it is incredibly soft (only 2.5 on Mohs Scale of Hardness), making it almost impossible to facet. Instead, amber gemstones tend to be formed into beads or cabochons which can then be successfully incorporated into jewellery.

How is amber formed?

Amber is probably one of the most easily recognisable ‘gemstones’ in existence – and I use the term ‘gemstone’ very loosely, because amber is in fact not a stone at all but an organic plant resin which has become fossilised over millions of years. Plant resin can drip down trees, trapping small debris such as seeds, leaves and insects on its way. The resin is then buried and fossilised through a natural process as the organic compounds polymerise.

Where is amber found?

Amber can be found both on land or sea. Due to its light density, amber can float on the surface of the seawater and can be washed up on the seashore. It is especially found in the Baltic countries, but is said to have also been found in Egypt, India and North America. Although, only around 100kg of it is found each year – which explains its value.

What colour is amber?

The distinctive warm yellow/orange colour of the raw amber stone is quite unlike any other material used in jewellery, and combined with its soft resinous lustre it is quite a unique substance. Read on to discover some of the more unusal amber gemstone properties.

One of the most attractive features of natural amber is the ‘foreign bodies’ and inclusions that are contained within it. When it was formed, millions of years ago amber was a sticky, liquid resin that oozed out of trees, engulfing anything that got in its path. Consequently, all manner of insects and seeds have been found inside nuggets of fossilised amber which have been perfectly preserved, providing zoologists and scientists with valuable insights and information from the Jurassic period and beyond. In fact, the idea of extracting DNA from insects preserved in raw amber stone is the premise on which the whole Jurassic Park film franchise is based!

Amber is said to have healing properties and has been used amongst folk medicine practice for many years. It is believed to absorb negative energy and pain, relieving stress and promoting a balanced mind.

How much is amber worth?

The most prized specimens of amber are those containing insects, and in some rare cases small animals such as frogs and lizards which will always command a higher value. However, there is another effect called spangling, which is actually caused by small internal cracks that create a characteristic speckled appearance. We associate this with good quality amber gemstones – due to its water content, amber is prone to drying out when exposed to heat or sun and this can lead to cracks. Heat treatment (when cloudy amber is heated in oil) is often used to intensify this potential ‘problem’, thereby making it a positive feature which is commonly known as Sun Spangled Amber. 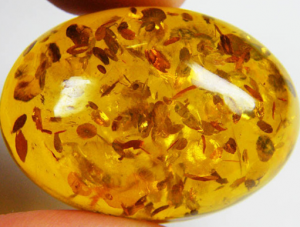 Because of its light weight and resinous lustre, amber is easily imitated using modern plastics and it can be difficult to distinguish the authentic from the fake. One of the more alarming methods of identification involves pushing a hot needle into your questionable piece of amber, as it has a very distinctive sweet, pine fragrance which will be emitted when heated. Although quite an interesting fact, it’s not recommended that you attempt this at home so it’s probably best to leave identification to the experts if in any doubt!

The history and inception of this substance is truly captivating, and gives us a fascinating insight into the past that you simply won’t find in any other gemstone.

Now we’ve answered questions like “what is amber” and “how much is amber worth?”, why not explore our range of Amber Gemstones? Amber’s distinctive orange colour is perfect for adding a touch of warmth to your designs – so give it a go and create your own amber gemstone jewellery!

Hi jewellery makers! I've put together a list of jewellery making books, that I feel would be ideal for those making their way into the world of … END_OF_DOCUMENT_TOKEN_TO_BE_REPLACED

I am old school…I admit it, some would go so far as to say I have Luddite tendencies; As despite huge advancements in technology and the way we both … END_OF_DOCUMENT_TOKEN_TO_BE_REPLACED

Whether you’re new to metal stamping or you’d just like to brush up on your knowledge, we can help. In our metal stamping guide, we’ll talk you … END_OF_DOCUMENT_TOKEN_TO_BE_REPLACED

What items have you discovered in The Complete Jew

Can you guess the celebrity wearing this beautiful

These silver savings aren't to be missed Don't mi